This was written for use as a liturgical piece. It can be read responsively, in call-and-response, or in whatever other pattern one likes.

As the title of this post notes, this was written in response to portions of A.J. Heschel’s widely-read book, The Sabbath, in order to raise up the idea that Shabbat exists — and we celebrate Shabbat — as a result of human recognition and need. This is in contrast to Heschel’s assertion, “It is not a different state of consciousness but a different climate; it is as if the appearance of all things somehow changed. The primary awareness is one of our being within the Sabbath rather than the Sabbath being within us. We may not know whether our understanding is correct, or whether our sentiments are noble, but the air of the day surrounds us like spring, which spreads over the land without our aid or notice.”

As a Humanistic Jew, I think there’s no inherent magic or force to Shabbat, but that Jewish celebration of Shabbat and Shabbat’s powerful hold on Jewish people is a matter of mutual reinforcement that began with human needs.

Permission is hereby given for use of this work, provided: any use must include acknowledgment of the source, and any use must be for ceremonial or educational purposes only. This work cannot be reproduced, in whole or in part, for any commercial purpose without permission of the author.

It has been said that Shabbat is a palace in time.

It has been said that Shabbat is an atmosphere, a climate.

We perceive atmosphere.
We change climate.

It has been said that Shabbat is a queen.

Queens and kings have power because we yield it to them.

Let us now build the palace.
Let us now note the time.
And as we do, we create the atmosphere of Shabbat.

We welcome Shabbat by giving some of our power away.
Let us now keep Shabbat,
so that Shabbat can keep us.

NOTE: The lines above in italics are intended for use at the beginning of Shabbat. If you wish to use this poem at Havdalah, marking Shabbat’s conclusion, you can replace the italicized lines with the following:

On entering Shabbat, we may yield some power away.

Let us now reclaim the palace.
Let us now note the time.
And as we do, we draw Shabbat to a close.

The Jewish Daily Forward has an article, “The Change-the-World Shabbat Dinner,” by Abigail Pogrebin about new approaches to community service in the Jewish community–with a special focus on how some of those community servants spend Shabbat. Before writing this article, Pogrebin spoke at some length with Rabbi Adam Chalom, dean of IISHJ (where I’m a rabbinical student) and congregational rabbi for Kol Hadash Humanistic Congregation in the Chicago area.

Pogrebin’s conversations with Rabbi Chalom heavily inform her exploration of how the Avodah Jewish Service Corps members celebrate Shabbat. The article is well worth the read, and gives great insights into how and why secular and Humanistic Jews continue to celebrate Shabbat and understand our Jewish identities.

Rabbi Ruth Adar, the Coffee Shop Rabbi, has a post explaining why it’s so difficult for Jews to get married on a Saturday. She gives three basic reasons: 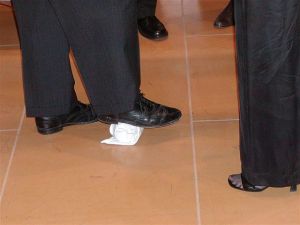 So, what can you do if you want a Jewish wedding on a Saturday? You can try to find a Reform (or maybe a Reconstructionist) rabbi who will officiate. You can wait until very late on Saturday night to get married (in Indiana this week, Shabbat on traditional reckoning ends at a little after 9 p.m.). You can have a Jewish officiant who is not an ordained rabbi perform the ceremony, and build Jewish elements in.

You can find a Humanistic Jewish rabbi or madrikh/madrikha. A madrikh/madrikha is a secular Jewish leader who has completed rigorous coursework and has been ordained by the International Institute for Secular Humanistic Judaism, but not one who has completed the full rabbinical program; many madrikhim lead or teach in Humanistic Jewish communities, and others lead or teach in other secular Jewish communities. (The Jewish Renewal movement, through its ALEPH Institute, also ordains pararabbinic leaders).

Humanistic Jews are committed to Jewish culture and identity, but we are more flexible when it comes to what can or can’t happen on Shabbat. Why? Because of how we value tradition and the role of the Jewish people in defining, refining, and remaking tradition:

For Humanistic Jews, Shabbat is a time of joy, a celebration of our connections to Judaism and to family, friends, and community. It is an affirmation of our Jewish identity, an expression of solidarity with the Jewish People. It is a chance to relax from the busy week, a space for self-exploration and discovery.

(This is from a fuller discussion of Humanistic Judaism and Shabbat here.)

Jews today routinely share families with non-Jewish members; a Sunday wedding may be difficult for non-Jewish relatives to attend, and connecting with family is one crucial function of weddings.

Humanistic Jewish rabbis and madrikhim will perform marriages between Jews and non-Jews. They will perform same-sex marriages. They will happily co-officiate with other clergy. Traditional Jewish elements can and are worked in in consultation with the marrying couple so that the ceremony reflects that couple’s interaction with and identity within Jewish life.

As a student rabbi, I have done almost all of the above–in one ceremony–though the couple in that case was not a same-sex couple. On a Saturday afternoon, so the couple could celebrate with their non-Jewish friends and family.

To be clear, all of this is a question of relative values, and of how one understands and interacts with Jewish traditions. As a Humanistic Jew, I recognize that all of Jewish tradition is the product of the Jewish people, and that we have the authority to remake it. This is one way that Humanistic Jews remake the tradition in light of the needs and demands of modern times.

And what’s more necessary in our world today than love?

Need a Saturday wedding? There’s a rabbi for that.

I posted earlier about Professor Joshua Berman’s essay in Mosaic Magazine, “What Is This Thing Called Law?,” about the reduction of flexibility in Jewish law. Mosaic has started (as is its format) to post responses to Berman’s essay, and the first one is from Rabbi Gil Student, entitled “The Art of Halakhah.” Accepting Berman’s common law/statutory law dichotomy, Student argues that the loss of flexibility is a result of both what those adhering to halakhah have actually wanted and the hybrid process by which poskim and dayyanim arrive at their decisions.

I like much of what Student says in response, even though, as I noted in my post on Berman’s essay, I don’t think the common law/statutory law distinction is particularly apt. But I like the response not merely for what it says, but for what I think it lays bare.

END_OF_DOCUMENT_TOKEN_TO_BE_REPLACED

So, the year rolls on, and Sukkot starts at the end of the week. As an apartment dweller, and a not traditionally-observant Jew, Sukkot is an interesting holiday. Put on top of that parenting an autistic child, and this is a real puzzle.

I’ve mentioned in a prior post that the existing community structures for Jewish education just don’t work for our family. This is partially because we are members of the Society for Humanistic Judaism and are not members of a synagogue locally (there’s no affiliated congregation here…yet), in part because for various reasons we don’t wish to avail ourselves of the community’s Bureau of Jewish Education, and in part because there just aren’t community resources that can do Jewish education for our son given how his autism…er…expresses itself.

So that puts his Jewish education on our shoulders. One of the big problems with trying to educate a lot of autistic children is that abstractions and discussion of things not present can be very difficult. In some ways, a child with autism can be the most absolute skeptic. So, he knows Shabbat and learned a bit of Havdalah this past weekend: candles are always a big draw for him. And even the abstract idea of resting on Shabbat makes sense–after all, he doesn’t go to school (though he does sometimes have therapy on Saturday), and Daddy doesn’t go to work.

Rosh Hashanah and Yom Kippur? I’m still working those out. It doesn’t help that he won’t eat challah or honey. He likes apples from time to time. But Yom Kippur? That’s a tough nut to crack.

And even so, suppose I built a sukkah, or we visited one. What, exactly, is the explanation that sticks for him? “Sukkot is like Shabbat, but sometimes it’s not on Fridays, and it’s about when the Bible says the Israelites wandered in the wilderness. But really, it’s a harvest holiday. And also, here’s a hut that the Israelites didn’t really sit in. Because, historically, probably not.”

We have had a little success teaching Hebrew: he knows Shalom and Shabbat Shalom, of course; we learned Shavua Tov last week during Havdalah; and we’ve learned apple (tapuach), orange (tapuz), and pear (agas). I tried watermelon (abatiach), but he wasn’t paying attention anymore.

Here’s what he knows about the Israelites: they are vegetables. Joshua is a cucumber. David is a little asparagus, and Goliath is a big pickle. Abraham is a grape. (I am now going to stop linking to VeggieTales videos.) So is Jacob. Joseph is a cucumber–the same one as Joshua. Moses is a cucumber, too–the one as Joseph and Joshua. Pharaoh and Nebuchadnezzar are both the same zucchini; his henchman is always a small, Latino gourd. Oh, and God has something to do with all this, but of course it’s a Christian version of God.

Why, yes, I do kick myself for introducing him to VeggieTales, though to be fair, I wasn’t thinking too hard about the theological fallout of that when I did so. He was two, after all.

We’re working on it.

If you asked me fourteen years ago, when I was starting graduate school in religious studies, whether I would be doing child education in Judaism, I would have laughed at you.

Boy was I stupid.