Apparently, we’ve been wrong about all that. If we just send kids to Jewish day schools, that’s it! That solves the problem!

END_OF_DOCUMENT_TOKEN_TO_BE_REPLACED

JTA has an article that R. Jeffrey Fox, the rosh yeshiva of Yeshivat Maharat (which ordains women under the title Maharat, rather than as rabbis), is going to issue a responsum (in Hebrew, a teshuva–an answer) on the question of whether a male rabbi must be present in the mikveh during conversion ceremonies. His answer–to cut to the chase–is no, a male rabbi need not be present. This all comes in the wake of the voyeurism accusations against Rabbi Barry Freundel in Washington D.C.

END_OF_DOCUMENT_TOKEN_TO_BE_REPLACED

This week, the traditional Torah reading cycle brings us to Parshat Korach, the biblical tale of a rebellion within the Israelite camp which included Korach, a member of the Levites, and 250 other leaders of the Israelites.

The short version of the story: Korach is angry that he and others didn’t have the priesthood opened up to them, he objects that the entire people is holy, and he challenges Moses and Aaron. Moses says, in essence, (1) Don’t be mad at Aaron, and (2) You would presume to challenge the divine plan!? As a Levite, you’ve been given privilege already–how dare you ask for more!? 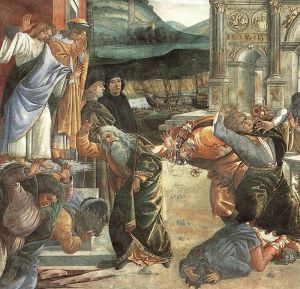 The result? Competing offerings are made near the Tabernacle, and the earth opens up and swallows Korach and his followers. END_OF_DOCUMENT_TOKEN_TO_BE_REPLACED

Just to have a rhetorical pivot point, I’ll rely on the trope that comes up in so much Jewish literature about individuals with special needs: we have to address Judaism to those who don’t yet know how to ask.

I know, I know, it’s hackneyed by now to keep going back to the four children of the Passover Seder. I did it anyway. But I do so with a particular point I want to make–namely, that liberal Judaism is far too verbal. END_OF_DOCUMENT_TOKEN_TO_BE_REPLACED

In a recent post on his blog, Emes Ve-Emunah, Rabbi Harry Maryles reflected on some of the accelerated rightward shift of haredi streams of Judaism:

Why do I care about what the Charedi world is doing? As I said they are the dominant culture in Orthodoxy now and their increase in numbers outpace any other branch of Orthodoxy. But even more than that, extremes when incorporated wholesale into communities eventually become the norm. Just look at mixed seating at weddings. That used to be the norm. Now it is considered to be a less than Tznius event. Some Charedi leaders will not even attend such a wedding!

I understand that in some communities these extremes of Tznius are the norm… and probably have been the norm for many decades or perhaps longer. Meah Shearim and Bnei Brak come to mind. But what is the norm for them was not the norm for everyone else in Orthodoxy. Until it was… and is!

Now, first, I’m not about to say that Rabbi Maryles and I are anywhere near on the same page on most things; he’s very firmly an Orthodox rabbi, and I’m very firmly not Orthodox. (I’ll avoid going, yet again, into why I think the ability to use the label “Orthodox” is a dumb concession on the part of liberal Judaism. Sometimes we’re just stuck with the words we have.) And whatever the Orthodox world is going to work out for itself, will happen.

I’m more concerned with what the increasing rightward moves in the Orthodox world–both in terms of population and halakhic output–mean for those of us who aren’t part of that world. In the event you think this isn’t actually a thing to worry about, let’s dredge back up our old whipping boy, the Pew study. END_OF_DOCUMENT_TOKEN_TO_BE_REPLACED

So, finally, I’m jumping on the “Jewish bloggers blogging about Pesach” bandwagon.

I know, I know–I’m late to the party. I can live with that. I’ve always been a bit of an outlier and, in the spirit of the festival, mah nishtanah.

And, like many, I’ve been seeing or receiving the various Haggadah supplements that are going around. I’m going to be a bit of a contrarian about Haggadahs for a moment. Specifically, I’m going to complain about text.

As in so many other things, Judaism has largely developed to have a “fixed” text for the Seder. A script, with stage directions. Many of these are important, of course–if you don’t know the Kiddush, you need the text, assuming that doing the Kiddush “right” is something you want to do.

But what if it isn’t? Or, put another way: should it be?

END_OF_DOCUMENT_TOKEN_TO_BE_REPLACED

I posted earlier this month that February is Jewish Disability Awareness Month. Now that we’re a couple of weeks in, I’m going to come back around to that topic a bit.

So, here we go again, panicking about assimilation.

END_OF_DOCUMENT_TOKEN_TO_BE_REPLACED

Rabbi Patrick Aleph over at PunkTorah has a post titled “You Aren’t Jewish Enough,” in which he discusses responses to questions about someone’s legitimacy as a good-enough Jew. He concludes that “we are so obsessed with legitimacy and looking like we know what we are doing that is keeps us from doing amazing things in Jewish life.”

He’s right. But I wonder whether this problem isn’t somewhat inherent to any form of Judaism that ascribes some level of super-human (as in, above and outside of humanity, not Superman-like superhuman) divine inspiration to the dictates of the Torah (oral and/or written).

One problem we face is that these divine-command aligned readings of Jewish sources make each commandment a divine dictate. When your actions are divinely required, you can’t really measure up, since the divine is inevitably described as perfect and beyond comprehension. So you are always left knowing that whatever you’ve done–however much you’ve done and in whatever manner–you haven’t really done it right.

Rabbinic Judaism–and thus much of Judaism as we know it today as inheritor of the rabbinic legacy–is intended as a scaffold to provide some guidance and ease the concerns one might have to the question of whether the commandment was done right. But we’ve seen that, over time, the interpretations of the commandments tend to become more strict and more burdensome; the interpretations cease to be a scaffold that can comfort individuals who inevitably will fall short, and instead become just a greater part of the burden.

By continuing to propagate a divine-command centered mentality–and by focusing on the public facets of observance, an inevitable change in Jewish life after the move to America–we reap the seeds of individuals feeling illegitimately Jewish, and sow them in the next generation.

How to get past this? Patrick Aleph attempted to reach out to people and invite them to do something in their bailiwick. This can help–though it’s hard to tell from the article whether he knew what people were interested in and tried to get them to engage, or simply solicited a “whatever” kind of contribution; the latter would be less likely to get someone to agree to help than the former, but I don’t know what happened in this case. (I also wonder whether the difficulty in getting someone to volunteer might not come from the remote nature of how the OneShul community works–since it’s online, you don’t get the personal-level ask that, let’s face it, makes it hard to say no when it’s easier to say that in an email.)

If we want more people engaged–if we want to sow something better than what we have–we’ll need to start by changing the culture as it is now so that people do begin to feel legitimate, and so that those who follow will not be made to feel illegitimate. There will not be an immediate path to this–so Rabbi Aleph, keep trying, in a focused way–because there’s enough alienation that getting this done will be a long process.

Ultimately, it may take rewriting Judaism; it’s always hard to know how those processes will work. But perhaps we can cease with the insistence on matrilineal descent for full membership in the community, so that individuals aren’t simply frozen out. Perhaps, too, we can change the rhetoric of what it means to be actively Jewish, so that the feeling one carries with them is more important than in the past.

And perhaps we can construct a Judaism that features less scolding, so that those who are already coming in the doors aren’t chased out for feeling inadequate. I know of a version of Jewish life that can do this…

Over at the Forward, Jay Michaelson has a piece titled “Answer This Question: Why Be Jewish?” In it, he notes that whatever each of us finds in Judaism, the next generation of Jews is unlikely to be swayed into holding to liberal Judaism (really, any form of Judaism) unless we can provide a persuasive, resonant answer to that question. Michaelson puts forth the tautology, that people are interested in what they are interested in, and notes that the book I am Jewish, which was published in the wake of Daniel Pearl’s murder, provided many answers to that question from various prominent Jews.

Michaelson’s challenge somewhat misses the point, I think. He’s basically correct that a single answer–because halakhah is divine, or you like deli food and Yiddish lilt–will not be persuasive.

But we don’t have to provide a single answer to that question.

There is an oft-quoted passage about the Torah from Pirke Avot 5:22, “Turn it and turn it, for everything is in it.” Just as apt is the statement Bamidbar Rabbah 13:15 (one of the collections of midrash on the biblical book of Numbers) that the Torah has seventy faces.

With somewhere around 3,000 years of history (depending on how you draw historical lines, this number could go up or down), Judaism has vast resources–material, cultural, literary, religious, philosophical, musical, moral–that can speak to vast numbers of Jews and to their own senses of their place in the world and in Jewish history. Opening the door to those resources is a crucial job for future Jewish leaders.

It is exactly that premise–that there are vast resources in Judaism that can appeal to modern ethical sensibilities, and nearly infinite ways to build a Jewish identity–that motivates the identification of many Jews with the humanistic Jewish movement. As humanistic Jews, we see universal values reflected in the full course of Jewish history and the full breadth of Jewish culture, while at the same time recognizing that not all sources are compatible with modern life and morality. All those sources are Jewish sources, but we recognize that their human origin gives us the ability and authority to determine our own Jewish paths.

It is not, then, the inherent value of Judaism and Jewish life that needs to be sold to Jews; it is instead the need to frame answers that are meaningful to the questions–explicit and implicit–posed by each person who asks, “Why be Jewish?” We have the resources to answer the questions; we need the skills to listen, understand, and frame the answers that best persuade the questioner.

Those answers may not come in words; they may come as an invitation to a Shabbat dinner, a Torah study, or a social event. The answers have to come in all modalities.

If we want others to engage in a vibrant Jewish life, we need to make our own Jewish lives vibrant, as well, while treating questioners like who they are: intelligent, engaged persons who are actively seeking spiritual homes and engagement. Humanistic Judaism provides the broadest resources for constructing that kind of life.