At least two organizations, PJ Library and JewBelong, are floating around memes about Hanukkah that have me…unimpressed. Basically, they tell you that your cell phone with a near-dead battery lasting for eight days is what Hanukkah is about. (I put these two memes at the bottom of this post.)

I can’t even with this idea. (And yes, here’s a preliminary “get off my lawn.”)

Let’s talk tachlis here. (“Talk tachlis” = Yiddish phrase that’s pretty equivalent to “let’s get down to brass tacks.”) These memes basically peddle the idea that modern, educated Jews should rest assured that their knowledge of the story of “the miracle of the oil” is enough to understand Hanukkah. It’s like when your cell phone is going to shut down, but somehow manages to just keep on plugging.

I’m going to come at this the long way around.

I spent last weekend — really, not even 36 hours, including an overnight stay at a hotel — in Philadelphia at a training on organizing and activism that Bend the Arc Jewish Action conducted. Some of the training was a little duplicative of things I had encountered or learned elsewhere; some of the training deepened my ability to do things I already knew about, or expanded my thinking on things. I met people — even people who live here in the D.C. area — whom I might not otherwise have met.

And we talked about Tisha B’Av.

We sort of understand Passover as quintessentially tied to the idea of refugees and journeys to freedom. In some respects, Tisha B’Av is the dark mirror of that.

END_OF_DOCUMENT_TOKEN_TO_BE_REPLACED

You may or may not have heard that a Museum of the Bible opened in Washington, D.C. I have…feelings about putting a museum like this across the street from the U.S. Department of Health and Human Services, a block from the FBI’s headquarters and from the U.S. Department of Education, and catty-corner from a State Department facility. The symbolism of that choice ought not be lost upon those of us concerned about separating church and state. (If you think it’s some neutral facility with no axe to grind, I have lovely real estate in the Everglades to sell you.)

Looking for field trip opportunities for the students at the congregation’s school, I went with our school director to the Museum to see whether and, if so, how students from our school might benefit from a field trip. Since we did the legwork, it seemed like a good idea to write up my impressions.

And, having written it up, why not share it with you?

END_OF_DOCUMENT_TOKEN_TO_BE_REPLACED

Tish’a B’Av (or Tisha B’Av, or Tisha Bov, or…) will soon be upon us, on the evening of August 13. I’ve previously discussed the holiday a bit, and so I won’t revisit the basics here. (Revisiting the basics, especially how the holiday is viewed from a Humanistic Jewish perspective, is what the first of those two links is for. The second link is sort of connected to how the rabbis of the Talmudic period understood the causes for the destruction of the Second Temple, which to some degree plays into their understanding of Tish’a B’Av.) And perhaps the word “truther” in the title of this post isn’t the best description for what I’m about to say, but hey, we all need a little clickbait in our lives.

Francesco Hayez’s “The Destruction of the Second Temple”; from Wikimedia Commons

So, here’s the thing. We continue, into the 21st century, to commemorate with some form of lamentation (pun intended) the destruction of a building that literally enshrined a view of the Jewish people and, for that matter, the entire universe that clashes with our modern conceptions of these things. We don’t generally think that the large-scale slaughtering of animals, scattering their blood on a stone altar, burning some of them whole and only parts of others, and pouring wine or meal or honey on an altar effect atonement.

And yet we mourn the loss of that sacrificial cult.

END_OF_DOCUMENT_TOKEN_TO_BE_REPLACED

It’s been a while since I posted! It has been busy around here: between regular work, days off from work running around with Humanistic Jew, Jr., prepping for the two classes I teach at a local university, leading a Hanukkah celebration, being a rabbinical student, co-editing Humanistic Judaism, and trying to generally spend time with my family, I just haven’t had a ton of time to write.

And then, as I was falling asleep last night or waking up this morning (it’s all a blur), I thought of this goofy idea for a blog post. And so, without further ado:

I’ve not mentioned it on the blog, but I’m a big Star Wars fan. I don’t do cosplay (dressing up as characters), go to conventions, etc., but in many other respects, you know, yeah, I’m a fan. (I’m even officiating a Star Wars-themed wedding in March of this year. Can you say that your work required you to read comic books?!)

(SPOILER ALERT for “Star Wars: The Force Awakens” and the “Star Wars: Vader Down” comics from Marvel)

END_OF_DOCUMENT_TOKEN_TO_BE_REPLACED

I’ve posted an awful lot about Hanukkah on the blog over the last couple of years. I have an outsized affection for the holiday generally, I suspect. Not unhealthily outsized–I’ve not festooned the HJinI household in silver-and-blue tinsel and lights, put up a Hanukkah Harry lawn ornament, and issued cheesy holiday sweaters–but, you know, I like Hanukkah. 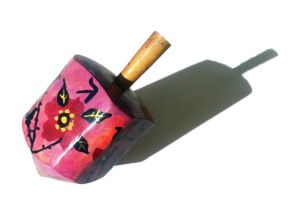 Dreidel–symbol of assimilation? By Marionaaragay (Own work) [CC BY-SA 3.0 (http://creativecommons.org/licenses/by-sa/3.0)%5D, via Wikimedia Commons

More than that, I just find the background and its subsequent history fascinating. A lot of that has to do with Hanukkah being one of the very few Jewish holidays for which we have an awful lot of really rich source information from relatively close in time to the events that gave rise to the holiday. With all that stuff–so much more than we have for many other holidays–there’s a lot more complexity that comes through the historical record.

One of the more interesting aspects to me–and I’ve posted about it before–is the tension of modern Jewish life celebrating the Maccabees versus the Maccabees as they were. But a lot of that writing has been about the history behind Hanukkah.

Today, what I find myself particularly enjoying is the irony of the celebration itself.

Think of the traditional story of Hanukkah: the evil king tries to force Jews to abandon Judaism in favor of idolatry. A brave band refuses, fights back, and wins freedom for the Jews. They send the Greek king and his assimilating Jewish flunkies packing. If you’re not doing the theologically cleaned-up version of all this, you think Yahweh made this happen. And maybe you talk about the oil lasting eight days. Nes gadol hayah sham, and ta-da! Hanukkah, which we now celebrate by buying cheesy sweaters at Target, marketed alongside cheesy Christmas sweaters.

No, I really haven’t bought any cheesy sweaters. I promise.

Even (especially!) liberal Jewish leaders fret persistently about assimilation. Yet what are our Hanukkah celebrations, really? A winter holiday where we light candles to fight off the dark near the solstice. A kind of gambling game adopted from Germans, who in turn adopted it from the Irish or British in late antiquity and transported it to continental Europe. Now, gifts, though that’s not “original” to Hanukkah.

These are all things done mostly at home. Unlike Rosh Hashanah and Yom Kippur, the daily schedule is basically unaltered. Even in the Orthodox world, work continues, school continues.

In other words, Hanukkah–the anti-assimilation holiday–facilitates Jews being pretty much like their neighbors.

Isn’t it ironic? Don’t you think?

Hanukkah starts in just a few days. (If you’re in Indianapolis and are interested in cultural alternatives in Jewish life, consider coming to the upcoming Havdal-ukah event!) Last year, I shared some thoughts I had at the time about Hanukkah, and suggested that what we miss in modern celebrations is that the thing that most makes our own time similar to Jewish life in the Maccabean period was the sheer diversity of Jewish life then and now.

This year, I want to take a closer look at what I think liberal Jews, in particular, need to keep in mind about the history of the Maccabean revolt and how that should play into Hanukkah celebrations.

To cut to the chase for those who don’t want to read on: we aren’t the Maccabees, we aren’t their heirs, and our holiday celebration should reflect that.

END_OF_DOCUMENT_TOKEN_TO_BE_REPLACED

Yehuda Bauer and others have observed that genocide, while inhumane, is not foreign to humanity at large. Humans are remarkably good at ignoring the prospect of punishment for their misdeeds–they were long before Hitler, and they have continued to be so–assuming, of course, that they viewed their murders as misdeeds. The field of genocide studies suggests some perpetrators did not view their actions as moral wrongs. And humans are remarkably able through cognitive dissonance to ameliorate or obliterate their own personal senses of guilt.

Specific genocides are special. But genocide, no matter where it occurs, though evil, is also thoroughly human. It is up to us to prevent and stop it, though we may never see its end.

Thoughts this Yom Ha-Shoah, the 70th anniversary year of the end of World War II and the Nazi Holocaust.

If you’re a secular or humanistic Jew, what’s in it (and out there) for you?

As always–see if you can’t find a community to celebrate with. The Society for Humanistic Judaism and Congress of Secular Jewish Organizations both have pages on their websites to help you find communities that might be near you. Many of these groups hold Megillah readings, Purim carnivals, costume parties, and other events, which are for many the most fun Jewish celebrations of the year.

Both organizations maintain pages about the holidays and, again, Purim is no exception. Here’s SHJ’s page; this is CSJO’s page. 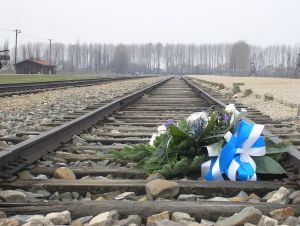 I’ve chosen the picture for this post carefully, because it shows the train tracks leading away from the main station at Auschwitz-Birkenau II.

It’s been some time since I really wandered around in the philosophical mire on the blog. But, sure enough, that time has come again. It’s also been a while since I nudged at any of the high-voltage lines that mark the boundaries of acceptable Jewish discourse. I’m doing that today, too.

And so I lead with this warning: if you don’t want to have your notions challenged concerning how American Jews should integrate Israel and the Holocaust into their identities, or if you’re likely to be offended if I do challenge them, you won’t want to read this.

You’ve been warned. Because for many years, I have thought that liberal Jewish life in the United States has been rendered pathological in its centering on the Holocaust and Israel. (If that sentence gets you mad, maybe you want to take a breather before continuing to read.)

Prof. Shaul Magid (hail to old IU!) published a book review at the Tablet Magazine website titled, “American Jews Must Stop Obsessing Over the Holocaust.” Seth Mandel gives a not-too-coherent response at Commentary to what he characterizes as Magid’s not-too-coherent essay. Mandel relies upon Paul Johnson’s history of the Jews and the idea of historical reflection to argue that survival is its own rationale.

And, of course, all of this comes on the 70th anniversary of the liberation of Auschwitz.