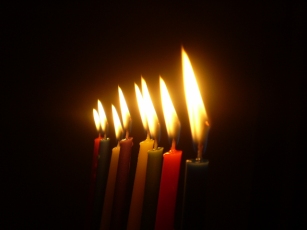 At least two organizations, PJ Library and JewBelong, are floating around memes about Hanukkah that have me…unimpressed. Basically, they tell you that your cell phone with a near-dead battery lasting for eight days is what Hanukkah is about. (I put these two memes at the bottom of this post.)

I can’t even with this idea. (And yes, here’s a preliminary “get off my lawn.”)

Let’s talk tachlis here. (“Talk tachlis” = Yiddish phrase that’s pretty equivalent to “let’s get down to brass tacks.”) These memes basically peddle the idea that modern, educated Jews should rest assured that their knowledge of the story of “the miracle of the oil” is enough to understand Hanukkah. It’s like when your cell phone is going to shut down, but somehow manages to just keep on plugging.

Um…no. We shouldn’t leave our children’s education about Hanukkah with the miracle of the oil; why should we continue to peddle Pediatric Judaism to adults?

A quick recap of the Hanukkah story: a Greek king, seemingly motivated by a combination of politics and narcissism, ordered Jews to worship like pagans instead of worshipping the god of Israel. Some Jews went along with this and were happy to adopt Greek patterns of life; others were not. Some of the ones who were not on board with Greek culture led a violent uprising against the Greeks and against other Jews. The Maccabees, who led the uprising, were ultimately successful. And in a blaze of irony, the Maccabees (a.k.a. Hasmoneans) established a Greek-Jewish kingdom that probably would have been quite an amenable environment to some of the Jews that the Hasmoneans killed during the Maccabean revolt.

When the Maccabees liberated the Temple, they had to rededicate the building. (Hanukkah means “dedication” or “rededication” in Hebrew.) Did it take eight days? Who knows. The eight days, according to the earliest documents available (the book of 2 Maccabees), were the result of the Temple being used for a delayed celebration of Sukkot.

Where did the story of the oil come from? The Maccabean revolt occurred in the 160s BCE. The story of the oil first appears in the Babylonian Talmud, a document from around 500 CE — nearly seven hundred years after the events of the Maccabean revolt. The rabbis of the Talmud ask, “What is Hanukkah?” The answer comes: God allowed the Jews to defeat the Greeks. When the Jews entered the Temple, they found one container of oil sufficiently pure to light the Menorah in the Temple; it was enough oil for one day. Somehow, that one little container lasted eight days — this is the miracle of the oil — allowing the victorious Jews to produce more oil to assure the Temple’s proper operation. (But don’t take my word for it: check the Talmud for yourself.)

This is the rabbis’ preferred version of the Hanukkah story because it downplays the importance of the Hasmoneans, who were historically opponents of the rabbis’ likely forebears, the Pharisees. But the story of the oil is…well, basically, it’s probably made up. No source before the 500s CE has this story, not even earlier rabbinic sources.

I understand, of course, that PJ Library and JewBelong are allowing people to access more about Hanukkah. But we can do so much better than the pediatric version of Jewish history that many people are going to see on Facebook and say, “Oh, I understand Hanukkah now!”

The real story of Hanukkah is complex. We teach it successfully to children; we teach it to college students; we teach it to adults. It’s a difficult story, because it doesn’t give us easy answers. It asks us to really think about what freedom might mean, and what tolerance means. Now of all times in the United States and in Israel, we need to wrestle with our history.

You can’t understand that by imagining your cell phone keeping its charge for eight days.

But a person can dream.

Wait…is my battery really that low!? 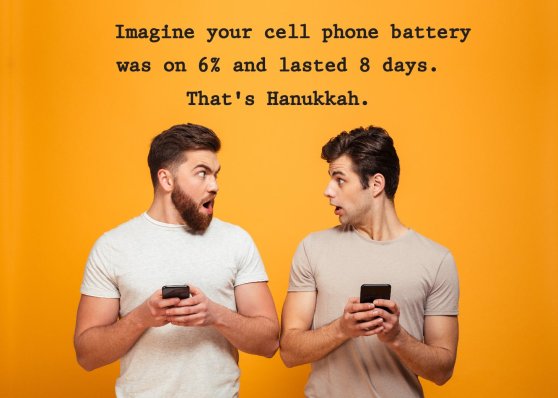