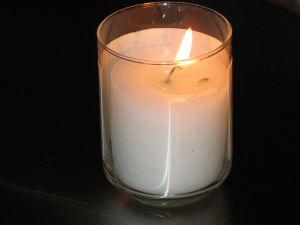 Yahrzeit Candle customarily lit on the anniversaries of loved ones’ deaths.

It is customary among many Jews when hearing of another’s bereavement to say “Baruch dayan emet,” which translates to “Blessed is the True Judge.” (That judge would be Yahweh.) It comes from the blessing that halakhah requires mourners to recite upon hearing of the death of certain relatives: baruch ata adonai eloheinu melekh ha-olam, dayan ha-emet (“Blessed are you Lord our God, King of the Universe, the True Judge”).

For some, giving a condolence with baruch dayan emet is a reflexive thing; for others, it’s a consciously Jewish response to bereavement.

Think about what baruch dayan emet means.  You hear someone has died–young or old, sick or well, expected or unexpected–and you say, “Blessed is the True Judge.” Theologically, this means, “Well, that’s what Yahweh wanted to do in His divine plan. Yahweh did it, so it must be correct.”

It’s not really improved by saying, “I’m so sorry for your loss. Baruch dayan emet.” That means, “I’m sorry you feel bad. But that’s what Yahweh did, so it must be correct.”

Once baruch dayan emet is added into the equation, a condolence can become something different from acknowledging the hurt of a loss. This largely depends upon the response of the listener. Thus, it may still be a condolence; some individuals may welcome the notion that there is a purpose to the loss of someone close, or to the loss of someone suddenly who doesn’t appear to deserve to have died.

But for many, a condolence with baruch dayan emet is not comforting. It is received as a statement that the pain of loss is improper–that there is something wrong with feeling the pain of  loss, or that any questioning of the reasons for the loss is somehow wrong–because the loss was divinely ordained.

In many respects, it’s not unlike saying to someone, “I’m so sorry. But she had a good, long life.” The mourner may well respond, “So what? I’m hurting now no matter what!”

I would suggest that, whether you do or do not believe in a deity, you ought not respond to news of someone else’s loss with baruch dayan emet unless both of the following are true:

I did not, and do not, say baruch dayan emet for the first reason. I simply cannot believe in the truth of the statement and I think, when pressed, most liberal Jewish theologians probably wouldn’t accept the truth of the statement. Most liberal Jewish theologians have ceased to accept the notion of an all-directing, string-pulling “god of history.” Whether it’s a neo-mystical notion of shefa, of overflowing divine light and benevolence, or a process theology model where divine action is only barely perceptible, like the effect of deep-ocean currents on waves as they crash on the beach, for liberal Jewish theologians what happens to individuals is the result of a number of different factors, perhaps the least of which is divine action or will.

It is, I think, very problematic for such people to respond with baruch dayan emet.

As a Secular Humanistic Jew, I don’t believe in any of the liberal theological models. A god not really in control seems unworthy of worship. But a god who demands justice, purportedly sets forth standards for justice, and doesn’t comply with those standards seems little more than an arbitrary actor–a bad example not to be followed, and to be appeased only because incomprehensibly unjust conduct makes us afraid. (My thoughts are hardly original–give Ecclesiastes a read sometime.)

Even if I did believe in the liberal models, I still wouldn’t say baruch dayan emet. I didn’t say it when I did believe that way.

How, then, to respond? Instead of baruch dayan emet, perhaps ask what you can do–and mean it. Or, better, say what you will do, and then do it. Saying something like, “May her memory be a blessing” works, too; there’s nothing inherently divine about a blessing.

Provide comfort with your words: “I’m sorry for your loss.” Then do something for the bereaved.

All the rest is commentary.