As a quick look back, there have been some accomplishments that I’ve personally been pleased with. I co-officiated a wedding for the first time. I’ve published a couple of book reviews in Humanistic Judaism, the “ideas” journal for the Society of Humanistic Judaism. I’ve posted a lot here. I’ve worked, taught, and learned. I think I’ve grown in some areas, and I know I’ve grown in others (ahem, waist-line).

But I have no grand hopes for next year. Enough of this year’s events have been difficult so that if next year is easier, I’ll be pleased with that outcome.

So, here’s to a hopefully less difficult new year.

Well, it’s been a bit of time since I did a post on the weekly parashah. Let’s break that trend.

This week we have Parshat Vayigash, the second-to-last Torah portion in Genesis. Vayigash starts with the story’s big reveal: Joseph yet lives. His brothers and father come to Egypt to live during the famine.

Buy us and our land with bread.

It turns out that the Joseph story puts the narrative’s enslavement of the Israelites at Joseph’s feet. Surprised? Read on.

END_OF_DOCUMENT_TOKEN_TO_BE_REPLACED

I’ve been holding this in, but I can hold no longer.

Tablet Magazine published an article titled, “The Maccabees Would Never Have Canceled ‘The Interview’.” I’m not going to delve into the free speech, North Korea, censorship or not, or other debates going on here; you can get that someplace else.

No, I’m almost literally banging my head against the desk because…Maccabees!?

Let’s get it straight: the Maccabees were pietists. My guess is that had films existed in the second century B.C.E., the Maccabees would have happily slapped a ban on “The Interview”–and likely thousands of other films. They were not 21st century-style First Amendment crusaders; that’s kind of precluded by the whole bit where they were happy to slaughter Jews and Greeks alike who didn’t behave as the Maccabees thought was appropriate.

If you want Sony to release the film, fine. But find a real argument for that–it’s not part of Hanukkah, and it surely isn’t part of the Maccabean worldview. 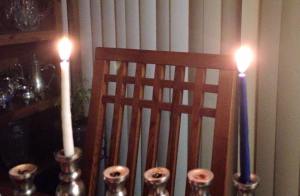 Our menorah for the first night of Hanukkah

(Note: updated 12/21/14 to add vocalized Hebrew and transliterations. If you observe errors or have questions, please feel free to drop a comment below. Also, see other Hanukkah posts here, here, and here.)

There are established alternatives within the movement, and we used two blessings last night for the Hanukkah candles. END_OF_DOCUMENT_TOKEN_TO_BE_REPLACED 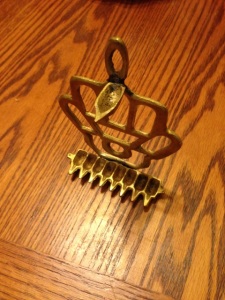 Continuing on the Hanukkah theme, for the last year or two I’ve wanted to try using oil instead of candles for Hanukkah. This year, Mrs. Secular Jew bought me an oil-burning hanukkiyah (Hanukkah menorah) so I could try it out. Think of it as a kind of “hipster” Hanukkah thing–let’s use a purportedly old-style hanukkiyah and some olive oil and get all hipster-ironic-“I was doing this before it was cool”!

But because I wanted to actually do this during Hanukkah and had never used oil before, I decided to do a “dry” run. (Get it? Because oil isn’t dry! Well, I thought it was funny.)

My thoughts? They must have used a TON of olive oil to keep the menorah lit in the Second Temple. Or maybe not…

END_OF_DOCUMENT_TOKEN_TO_BE_REPLACED

Today is the first anniversary of the death of Grace, Mrs. Secular Jew’s mother. It will be quiet on the blog until next week. 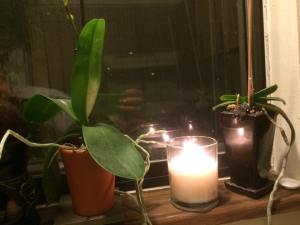 Yahrzeit candle between orchids for Grace

Grace’s eldest son (Mrs. SJ’s brother) predeceased Grace. He grew orchids, and Grace was partial to them as well. And so, too, is Mrs. SJ. Grace’s first yahrzeit candle is stationed on the windowsill in our kitchen between two orchids, one of them having belonged to Grace.

Also, she loved my imitation of Bill Clinton’s voice.

We were very fortunate to have been able to move both of Mrs. SJ’s parents–already in their mid-80s–up to Indianapolis in April of 2013. We did that to help take care of them, and it added dimension to our lives. It especially added dimension to Secular Jew, Jr.’s life. We live so far from almost all of our family members on both sides, and he benefited from extra love in his life.

But we didn’t know the extent of either of Mrs. SJ’s parent’s health problems.

This has been a difficult first year for Mrs. SJ. We didn’t know much about Mrs. SJ’s father’s needs, because Grace was able to protect us from it, despite her declining health. Mrs. SJ is tough; that’s all I’m going to say about that.

Please, have open and candid discussions about your family’s health. Life is tough enough, and making decisions for those closest to you is tougher still at times. You shouldn’t have to be surprised by the toughness if you can be prepared.

For Mrs. SJ: I’m sorry I couldn’t come up with this last night when you lit the candle. I’m working on it.

For everyone else: Grief doesn’t go away with time. Hold close those whom you love. Shabbat Shalom.

There’s been a decent amount of traffic coming here from searches about how secular Jews celebrate Hanukkah. So as not to leave you empty-handed, new visitor, here’s a short list of resources (and pardon my laziness–but why reinvent the wheel?):

(If I didn’t mention a resource you know of, please let me know and I’ll add it to the list!)

So, NPR has this bit today: What if Atheists Were Defined by Their Actions?

The short answer? There are such individuals. Some of us are called Humanists. Read more. (Coincidentally, Patheos has an article about atheism and values.) To paraphrase Turk from Scrubs, we do what we do when we do what we do:

We don’t simply define ourselves by the single issue of belief vel non in a deity. We define ourselves as seeking to do good without a god–or better, I think, without respect to the question of a god, because it’s just not an interesting issue for some of us. And the author of that NPR piece, speculating about what ifs, missed the chance to help address the very problem she brought up.

So here’s my small effort to fix that.

I am not saying that all atheists are Humanists, or vice versa. Many Objectivists are atheists, and Objectivism is largely incompatible with Humanism. But the post’s author seems to bemoan that labels are necessary without looking to see what labels and affiliations are out there.

If we’re realistic about the world we live in, we acknowledge the necessity of labels. It’s a shame the NPR piece didn’t take a harder look at the issue.

An important read. (Sometimes this is a problem among liberal movements, too.)

There is a fascinating (to me anyway) and respectful debate about Partnership Minyanim going on in a multi-part series over at Modern Torah Leadership. It starts off with an essay by Rabbi Aryeh Klapper,  Are Partnership Minyanim Orthodox?  and then includes responses from Rabbi Dr. Martin Lockshin, Malka Simkovich, Shira Hecht-Koller, and Dr. Yoel Finkelman.

While the essays contain very interesting exchanges on the nature of rabbinic authority and how vital it is for Orthodoxy and how Partnership minyanim challenge it, I could not help focusing on another aspect of the exchange.

In his pro-Partnership Minyanim essay, Rabbi Lockshin writes on the issue of enacting change that does not come from rabbinic innovation but is driven by the will of the laity:

Partnership Minyanim do not have the support of the “gedolim,” the great Torah sages of our generation. In this, PMs are like many other innovations…

Hanukkah starts in a couple of weeks. And so, too, will start (actually, this already started) the observations that Hanukkah is a minor holiday downplayed by the rabbis, etc.

And, being the contrarian I am, I think we should play it up–especially in the Humanistic Jewish world.